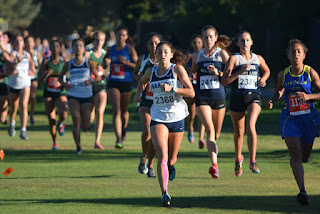 Stockton, CA – With the pre-season now behind them the Warriors opened their invitational season against 37 schools in the Pacific Tiger Invitational at Elkhorn Golf Course in Stockton, Saturday.

The Lady Warriors, who came into the race ranked #14 in CCS, held their own against top competition from the San Joaquin Section, North Coast and WCAL rivals Sacred Heart Cathedral and Archbishop Mitty. Mackenzie Thomas took advantage of the flat, fast conditions and scorched a personal best for 5k, finishing as the Warriors top finisher in 20:09 for eleventh place.

Also finishing in the medals were Sophia Patterson and Jordan Hahn. Patterson finished 14th with a stellar run of 20:29, dropping an incredible 80+ seconds from her previous 5k best. Jordan Hahn, a freshman, is finding her groove and quickly settling into a varsity role this season. Hahn moved up steadily through the race to finish 15th in 20:31.

Hannah Theaker also had a big breakthrough as well finishing 23rd in 21:07. It was her first time breaking 22 minutes for the 5k distance. Immediately after the race it wasn't the 60+ second improvement that had her attention it was the 7 seconds that kept her from breaking 21.

Katelyn Stone finished as the 5th runner in 21:53, a strong debut for the freshman. Kayla Nanez was close behind in 22:00 as Ashley Clayton rounded out the varsity team with a personal best of 23:19. 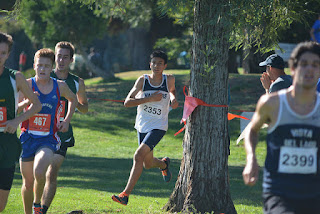 It was a strong day for the Lady Warriors who finished second place in team scoring.

Sam Cuevas led the way for the boys team with a strong run of 17:16 that was good enough to finish top 20 in the medals. Wesley Deffenbaugh was next to finish in 17:56 and was followed by Cameron Lockard (18:05) and Ben Buckman (19:10). Joe Renati and Nedu Ndili did not compete.

The Warriors open league competition on October 5th in the Baylands in Sunnyvale. 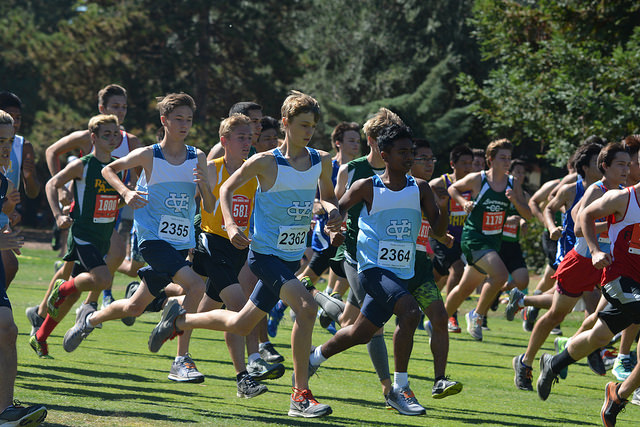 Posted by Warrior Nation at 1:57 PM