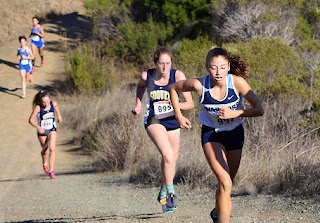 Belmont, CA - The Valley Christian Girls Cross Country team finished 4th in CCS DIII at Crystal Springs, Saturday. The run marked the ninth time in ten years that the Lady Warriors have finished fourth or better at the section championship.

With injury ending the season of the top two returning runners the Warriors found themselves relying on their depth early into the season. A strong core of younger runners combined with experienced veterans stepped up to keep the team’s State Meet hopes alive. While the end result fell short of their goal of finishing top three, the team gave it their all and left it all out on the race course.

"There are not many teams out there that would have a shot at making the State Meet after losing their top runner, let alone two of them." Coach Small said. "Fourth place has a bit of sting to it but these girls should be proud of what they accomplished today."

"I'm incredibly proud of these young women,” Coach Blaha said reflecting on the season. "Their ability to rise above trials was tested this season. They gelled as a team and maintained a spirit of tenacity that we as coaches love to see.”

“It’s my hope that these women celebrate this season and look excitedly ahead - we expect big things from each one!"

With the early exit of two of their top runners the girls would need to rely on their depth. Brianna Becerra was an up-and-comer on last year’s team and one of those younger runners who stepped up to to have major roll on this year's team. Her emergence as one of the elite runners this season was hardly a surprise. Following a stellar freshman track season where she ran 5:46 for 1600 meters and 12:15 for 3200 meters she came into the 2015 season as one of the top runners on the team. Becerra showed what she was capable of leading the team in WCAL #1 and then followed that up with runs of 20:30 in WCAL #2 and 20:37 at the WCAL Championship. She was the team’s #2 runner in both of those races. 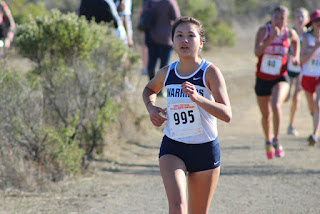 Two other sophomores were key contributors this season after having a breakthrough season of their own. Sophia Paterson has transformed from a novice runner, who ran her first three mile run in 27+ minutes, to being one of the team's leaders. Paterson dipped under 7 minute pace at the Stanford Invitational where she ran 21:40 and ended as one of the most improved runners this season.

Hannah Theaker decided to give cross country a try half way through the season her freshman year, liked it and has since blossomed into one of the team’s top runners. She has demolished her personal bests all season and stepped up big for the Warriors ending the season as a scoring runner at the WCAL and CCS Championship.

The breakthrough of the freshman runners was a catalyst for this season’s success. Kayla Nanez asked for a shot to run varsity and delivered in her first race placing as the team’s #3 runner in the first WCAL meet of the season. She never looked back and her competitive and fearless race style provided a spark that was a turning point for the team. Running well under 7 minute mile pace for the 5k course it was a statement race for the freshman. Nanez continued to step up for the biggest races, evidenced by her finishing the season as the team's #2 runner at the CCS Championship. 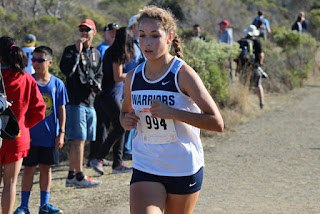 One of the most welcome developments this season has been the progression of Mackenzie Thomas. It didn't take long for her to find her grove this season, as the freshman has been stellar from the start. In her first WCAL meet of the year she finished as the team’s #2 runner and then went on to lead the team through the remainder of the season. Thomas’ big breakthrough came at Golden Gate Park in WCAL #2 when she ran under 20 minutes and finished with the 4th fastest time in school history. That momentum carried into the WCAL Championship where she ran the 4th fastest time ever for a freshman and is #13 all-time in school history.

While the Warriors boasted a talented core of underclassman the team looked to the experience of their veterans for leadership. The Warriors were excited to welcome back Nicole Favre in to the fray. The team’s 2014 Runner of the Year debuted at the Stanford Invitational in September and worked up the ranks to end as a key member on the varsity team. Favre ran a personal best at WCAL #2 and was key in the team advancing to CCS and their 4th place finish.

Kiko Li was another key contributor this season leading the way in many of the races this season. Li was motivated from the start finishing as the team's top runner at the opening time trial and again at the Stanford Invitational where her mark of 21:35 stands as #11 all-time. Battling a tweaked muscle in the hip flexor after that race, Li couldn’t quite get back to form by the end of the season but was

Two freshman led the way for the Lady Warriors at the CCS Championship: Mackenzie Thomas was in first for the Warriors with an 18th place finish in 20:11,  Kayla Nanez finished in 20:52 for 28th place. Nicole Favre finished in 35th while Bianna Becerra and Hannah Theaker placed 39th and 42nd. Kiko Li and Sophia Paterson rounded out the varsity team. Five Warriors made their CCS debut in the race as the girls will return 7 of their top 9 runners this season. While they fell just short of their season goal the team now looks forward to taking the next step forward.

Posted by Warrior Nation at 9:22 PM