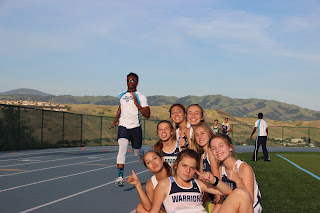 It was an impressive day that saw two school records, numerous additions to the team's all-time list and 88 season bests!

The first school record to fall was in the 400 meters. Kayla Nanez third place finish in 61.54 sets an new Freshman school record, bettering Shelby Smallwood's record of 62.01 set in 2011. Originally entered in the 100 and 200 meter races Nanez, who has had sights on the Freshman record all season, asked for the change. "I want to break the record at home," the Freshman said. "I really run fast here."

She got her race, and the record. Her time is #11 all-time in school history and currently the third fastest time this season by a freshman in the CCS.

The second record of the day fell in the boys 300 Intermediate Hurdles. The lone entrant in the race Mathew Weeks jokingly said before the race he was "going to set the school record."  Not something usually on the radar running solo. Impressively Weeks dropped nearly a second off his personal best to finish in 41.21, improving the upon the previous record by Scott Fravel in 1992.