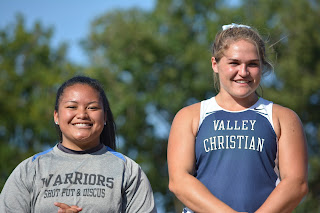 Elena Bruckner returns to defend her state title in the girls shot put and is the top seed with a mark of 53-8. Winning the event as a junior, Bruckner enters the meet as the California State record holder and is currently ranked #2 in the nation with a season best 54-7. She is also the favorite in the girls discus with a season best 186-10. That is the top mark in the nation this year and ranks #4 in U.S. history.

Bruckner finished third in the discus last year and it won't be any easier in 2016. The girls discus is one of the most competitive events at this year's state meet featuring three of the top seven discus throwers in the nation. Bruckner will be facing nationally ranked competition, U.S. #5 Laulauga Tausaga-Collins of Mt. Miguel, who enters the State Meet as the top seed with a mark of 166-4 from the San Diego Section. She has a personal best 167-3. Also expected to challenge for the state title is U.S. #7 Pamela Amaechi of Abraham Lincoln in San Francisco with a personal best 166-5.

Bruckner, along with 2015 graduate and State Champion Ronna Stone, both qualified for their first state meet as sophomores. Now another Valley Christian sophomore, Athiya Iese is headed to her first State Meet. Iese advances in both the shot put and the discus, both results have an opportunity to make the final. Her throw of 133-9 surpassed the state automatic qualifier, the average 9th place qualifier at the State trials. Iese enters the State Trials seeded 17th in the shot put and 19th in the discus. 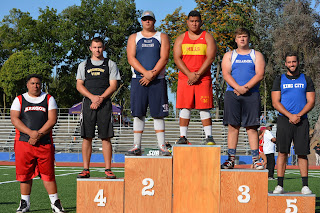 It will also be the first state meet appearance for Dylan McCreery who moves on in the boys shot put. Coming off his second place finish at the section championship he enters the State Trials the 20th seed. It has been quite the year for McCreery who has improved more than 7 feet in the shot put this season, setting a personal best 51-9 in the CCS Trials.